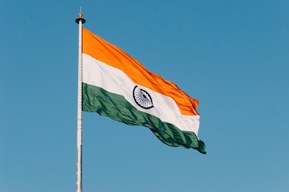 The beginnings of India's history go back up to 5,000 years and are marked by phases of different rule, English influence and numerous conflicts. The subcontinent saw many rulers, dynasties and moguls come and go. The name India is derived from Indus, the longest river on the Indian subcontinent, which has its source in India and flows through what is now Pakistan. From 2500 BC onwards, the first advanced Indus civilization flourished here, one of the oldest civilizations in the world. Around 1500 BC, the first Aryans came to this area from the north. They came from the Punjab along the Ganges deep into India and reached Bengal. The mixing of the Aryans and the earlier Indus gave rise to the classical Indian culture. At this time, Hinduism and Buddhism, two of the oldest and largest religions in the world, were particularly influenced. British influence began with the establishment of a trading post in Surat (Gujarat) in 1612, made possible by Queen Elizabeth I by means of a trading partnership agreement, which ensured a monopoly for trade between India and England. Thus the East India Company, which expanded on the basis of this treaty, became the determining element. Not only the British, but also the Portuguese; the French and Dutch had their representations in India.

Resistance to British colonial rule, especially under Mahatma Gandhi and Jawaharlal Nehru, led to the country's independence in 1947. The subcontinent was divided into two states, the secular (Hindu) state of India and the smaller Islamic state of Pakistan. After two previous wars with Pakistan, a third war in 1971 led to the secession of East Pakistan and the founding of the new state of Bangladesh.

The capital is New Delhi.

The climate varies from tropical monsoon in the south to moderate climate in the north.

India's form of government is the Parliamentary Republic. Prime Minister since 2014 is Narenda Modi.

After more than 65 years of independence, India has developed a consolidated democratic system in which the separation of powers and federalism are the mainstays.

Relations between Germany and India

About 1000 German companies have settled in India, the most popular location is Pune (especially for production).

Germany is India's most important trading partner in the European Union.

Baden-Württemberg has been Maharashtra's partner state since 2015 and there has been a town twinning between Stuttgart and Mumbai since 1968.

As early as the 1960s Mumbai, which was then still called Bombay, contacted German cities with a view to entering into a partnership. Stuttgart was predestined for this, as it already had numerous connections to India at that time - for example, it was the seat of the Indo-German Society and the Indo-German Chamber of Commerce. More information

Hindi हिन्दी is the most widely spoken language in India and the main language of 41% of the population.

Most popular sports include cricket, hockey and football.

Indian art is in many cases bound to religious beliefs, customs and rituals. Particularly impressive aspects of Indian culture relate to, among other things, classical Indian dance, classical Indian music or architecture.

The diversity of Indian cuisine reflects not only the enormous size of the country, but also its religious and cultural history. For example, Indian cuisine contains many elements of oriental cuisine such as pilaw, but also western influences of the former colonial powers such as tomatoes, potatoes and chili. Characteristic for the cuisine of the entire subcontinent are curries and the variety of spices. Vegetable food plays an important role in Indian cuisine. Thus, many Hindus eat predominantly or exclusively vegetarian food, but the renunciation of meat is no dogma. However, the consumption of beef is taboo, as in Hinduism the cow is of special importance. Read more

Yoga from India is on the UNESCO World Heritage List - Intangible Cultural Heritage of Humanity since 2016: Yoga has an important meaning in Indian society, for example in the fields of health, medicine, education and art. Based on the union of body, mind and soul, yoga aims at mental, spiritual and physical well-being. The techniques used include various physical exercises, meditation, breath control and spiritual practices. Traditionally, yoga has been passed on through the master-disciple principle. Nowadays, yoga ashrams, educational institutions and community centers also take on this task.

More information about the culture of India

Travel and security advice from the Ministry of External Affairs

Representations of Germany in India

Representations of India in Germany